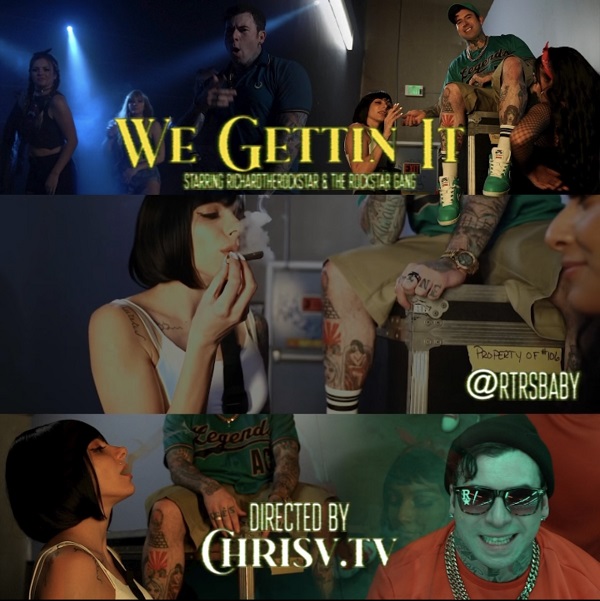 BAY AREA, CA – For the longest time RichardTheRockStar has had a vision to create a new era of Hip-Hop that represents a diverse culture influenced by the Bay Area sound from which the genre first arose. Though it’s been a long and winding road, the multi-media artist has finally captured his vision in the form of the Rockstar Gang.

Currently made up of artists Jshxtta, Baked Beka, and Mr. Cooper, the quartet works together to create an eclectic mixture of sounds against the backdrop of Hip-hop for something truly organic and unique. They’ve completed 11 tracks that they’ll be releasing over the course of the year, starting with their first hit “Bananas,” which is currently available across all streaming platforms. The song highlights the positive rebelliousness of the group as they pave a path to something different in an industry that often stifles creativity in favor of a tried-and-true cookie cutter model that is proven to bring in the money.

“Rockstar Gang has been an underground thing I’ve done with my Hip-hop career for 10 years,” Richard said. “We don’t f*ck around with any of the fake people in the industry. Too many people try to take advantage of you anymore, and I’ve seen some crazy shit over the years. We’re not anti-major-label, but the deals we have with each other are not about taking cuts from each other or double-dealing or anything like that. We come from a real rebellious place against the standard industry norm, and we want to bring a cultured, diverse hip-hop group to the table that represents something different and fresh. This is our first anthem.”

Richard said the song came together much like the group did – slowly and organically. Richard himself has been an artist operating out of the Bay Area for the better part of a decade. He’s become well known in that part of the country, and has networked with a lot of movers and shakers in entertainment. Along the way he met Beka, who is a social media influencer from the Bay Area who has been a model but also is a survivor of the streets and brings an edge to the gang. The two became friends and for seven years Richard tried to encourage her to jump on a song with him.

Similarly, Richard ran into Jshxtta while working in the studio one day with well-known producer Mr. Cooper – who is a friend of Tas Prestige, owner of Temple Studios where the group recorded the album. The young Jshxtta had been experimenting with music and trying to decide if a recording career was something he wanted to pursue full-time. When he and Richard met, their shared passion for originality and eclectic energy was immediately apparent, and they haven’t looked back since.

“From the first time I met him I recognized him as the kind of guy who comes to the studio to just sit there and learn,” Richard said of Jxhxtta. “He’ll just be there because he wants it. I’ve been like that. I love his style he brings from The Bay. With Cooper, he brings that boom-bap that has a good energy. He’s like a hype man, too. He’s fun to be around. And then Beka is someone I’ve been friends with a long time. I’ve always been a fan of her as an influencer and a model – she’s really branded herself as an icon for where we’re from – and I believe in her art and her talent. Ultimately we just want to be known as a group that brings their individual energy and vibe to the table to create something special. It’s not cookie-cutter, it’s unique. It’s like The New Revolution or Snap from the 90s, or The Roots or Black Eyed Peas of today – those groups you see that you want to see more of every person and you love the way they interact together. We bring culture and love and a clear message that we’ll treat you well and make sure you feel valued. You don’t have to do anything opposite of what you want to do in your life.”

Richard said each of the artists also have individual projects they’re working on that should release later this year. Collectively they’ll be shooting more videos for the singles they want to release throughout the year, starting with the next single “We Getting It,” which is currently available on all streaming platforms, as well.

To listen to Rockstar Gang’s music, or to follow them on social media, please visit the following links:

Enter the world of the next big star in Hip Hop/R&B. Emerging NYC star Dxddy Mxxn capitalizes on his

Riding the success of his last single “Drink in My Cup,” Daymo returns with “These Days" featuring Nikki Paige,

Fresh off the release of her debut project, Backwood Brat returns with the music video to her latest, “Changes