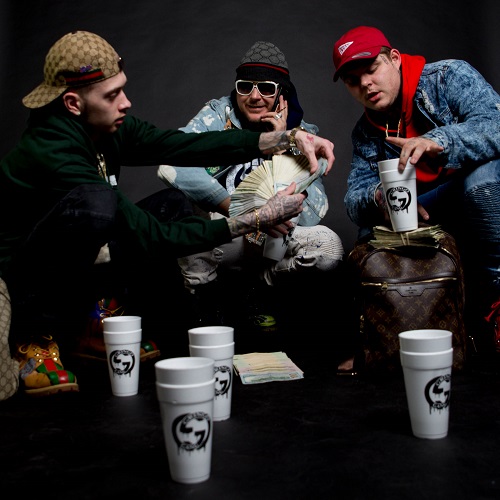 Big Heff: Where are you from?

Gringo Gang: We are from Indianapolis, IN, the Westside and Southside mostly. Better yet, the Midwest! We are from the midwest!

Big Heff: How Did you get started making music?

Gringo Gang: We started back in 2015, it started as a city wide movement with a clothing line we were pushing and then J-Mo and Shawn Ham started to come around more and we formed the group Gringo Gang. It’s crazy because the name came from a friend who was actually making fun of us. We took it and ran with it.

Big Heff: What are some of your music influences?

Gringo Gang: Some of our music influences are first and foremost Axl Rose! We are like 80s babies stuck in new age trap. Also artists like Marilyn Manson, Young Dolph, Eddie Grant, and Migos. We are pretty diverse in what we listen to but definitely put our own twist to what we do.

Big Heff: What are some of the concepts involved in making your new projects?

Gringo Gang: Most of the concepts we try to develop around our everyday lives. The words we say, the clothes we wear, the lifestyle. We are really different in what we like throughout the group but we all have our own swag and ways of thinking. So we try to mesh those together and give the fans a piece of who we are in these concepts. Our newest project is called “The Language” because we want to indoctrinate people into our lingo first.

Big Heff: Do you have any shows coming up?

Gringo Gang: Yes, we just opened up for Trippie Redd in LA, and Rich Homie Quan in Nap. We also do what they call the “Redneck Raves” all over the Midwest, most recently in Michigan. It’s crazy, and I’ve never seen anything like it. We are going to continue touring with them and also doing our own EP release party in Los Angeles in August.

Big Heff: Who Produced The Song?

Gringo Gang: Zaytoven produced the song. We went to Atlanta and chopped it up with him, it was a really cool process. We sat down and went through a thousand tracks until we found that one we all agreed on and he loved it for our sound. He’s one of the most legendary producers in the world and in our culture so it was a blessing to work with him on the record.

Big Heff: What Album or Project is the Song on?

Gringo Gang: The song is on our EP, “The Language”. It drops in August. It’s our first project from the new partnership we entered this year.

Big Heff: Who Shot the video? and there affiliation?

Gringo Gang: Our in house guy Zane shot the video. We went to Cincinnati, linked up with Cook Laflare and made it happen in his neighborhood. It was our first time out there so it was dope. Our other in house creative director Kaz Lil Daddy edited the video and made it come to life. He’s like the Quincy Jones of Indianapolis both musically and visually if you can imagine that!

Big Heff: Is There anything else you want to tell your fans?

Gringo Gang: Yes, we are the dopest fucking thing they will experience in 2018! lol We really love what we do and put our all into the projects to give the fans the best experience possible. From the shows to the music and videos we aim to create high quality shit for the people to rock with! We are a family and our fans are related and on the journey with us. Oh and lastly a Gringo is an “American” lol