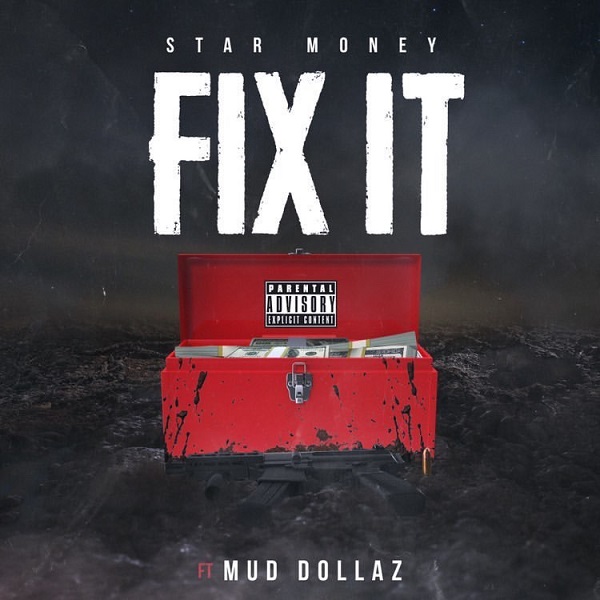 JOLIET, IL – Songwriter, rapper and entrepreneur, Star Money brings his savage style of Rap straight out of the trenches. His listeners experience genuine testimony about where Star Money comes from. The rhyme, rhythm and chemistry of his flow connect with listeners as he speaks about the struggle.

Chosen from a field of 19 competitors judged off stage performance, crowd reaction and social media response, Star Money signed with Ice Wata Records in April of 2019. He had started out on his own independent label, Star Money Gang Entertainment, but with Ice Wata now working with Empire Records, Star Money is enjoying a two for one!

The first single of this new distribution deal is called “Fix It” (featuring Mud Dollaz). Released in mid June, the track talks about bouncing back, readjusting and rebuilding from life’s challenges.

Star Money’s songs relate to one another, but each has its own unique feel. “Stick Out,” another song released recently, features Chicago rapper Memo 600. Doing well, they rap about watching out for and defending themselves against the opposition.

A prolific creator, Star Money has dropped several other singles this year, including “Bando” which talks about staying focused and hustling to make money from nothing, and “Cash.” Starting fresh after his release from prison, Star Money was not looking for handouts, and “Cash” talks about getting the money he needed through his own efforts.

Although he didn’t get serious about his music career until he was 18, Star Money has been rapping since he was 10 or 11 years old. At that time, an older man (Reggie Loc) from his neighborhood put out an album and became Star Money’s role model. A major influence on Star Money’s career, Reggie passed away in 2015.

Star Money is strategizing globally through a number of enterprises. Besides having his own record label, he has a successful jewelry business, Star Money Diamonds x Grills. Featuring custom chains, grills, rings, watches and bracelets that are a popular aspect of Hip Hop culture, Star Money also initiates music collaborations through this business. “What I’m trying to do,” Star Money said, “is show the world that, no matter what you’re going through, if you keep focused on your dreams, you can make it.”

He has personally kept going after tragedy and personal loss. His mother, Tamala Clayton who passed away last year, was the inspiration for his next independent project, “Tammy World.” Star Money also plans to shoot music videos for “Fix It” and “Stick Out” in the coming weeks. He is also working on an Ice Wata Compilation album titled “Ice Wata Army Front Line.” Slated to drop on August 15, this will be the first album released by Empire Records under the Ice Wata Records label. Be sure to check out Star Money’s music, available now on all major digital platforms.

To listen to Star Money’s music, view his jewelry selection or to follow him on social media, please visit:

Choo Jackson is one of the new school's most promising recording artist. The Pennsylvania native continues to impress exciting

Lyrica Anderson, Love & Hip Hop alum, has been on a trajectory to the top of the charts in

The Music Business Road to Success! Presenting ‘For The Record’ | A Must Read and Course by Debbie Egel, Esq

A lot of independent artists are “struggling”.  They spend their time, energy, and creativity making music but not profiting