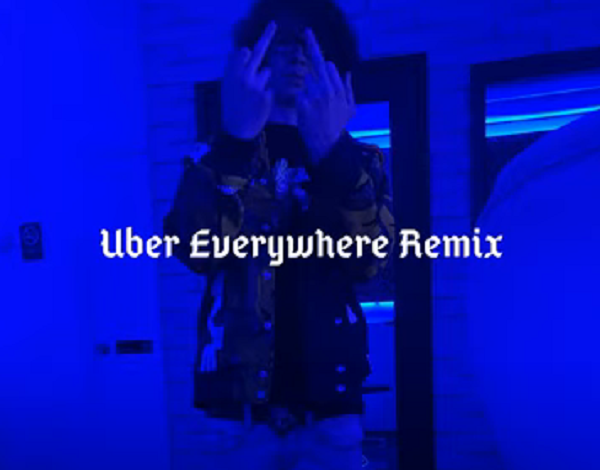 DALLAS, TX – Inspiration can strike from pretty much anywhere for young up-and-coming artist Dylan Robison, better known by his stage name SpaceBallz. Take his latest single “Uber Everywhere” for instance. Inspiration for the song struck one day while sitting in class at high school. He was a senior and hated school – so much so that while sitting in class that day he decided he was done. He stood up, said goodbye to his teacher and classmates and left. He went home and wrote the song “Uber Everywhere” in five minutes and in less than three months, he had tens of thousands of streams online and a budding new music career.

That’s the way SpaceBallz lives his life and his music is a reflection of that organic reaction to the world around him. Raised on the West Coast and a child of the foster care system, SpaceBallz saw his fair share of hard times. He and his fiancé even spent about eight months living homeless in their car before his music began to take off. Now at only age 21, he has moved to Texas and he and his fiancé have a son. And he’s making major strides in the music industry. His unique blend of Trap and Pop culture make him a voice for his generation with a sound that’s equal parts progressive and relevant.

“I’m a trap artist and I talk about things I do in my music,” he said. “Real stuff, not things I don’t do or haven’t experienced. I write all my own music because I’m real, not fake. I don’t care about social media or anything that requires you to put on a façade. All I care about is making good music. This single is a great example of that. When I wrote it, I didn’t care about anything anymore and I knew that one day I was going to get famous and make money off my music. I put that in my head and I haven’t stopped.”

SpaceBallz said that like many other successful artists, music saved him during his turbulent youth. Foster care left its share of scars on his life, and music – everything from Bob Dylan to Slipknot – helped him overcome those hardships by way of providing an escape. He went through shelters and homes for five years during which time he taught himself to play the piano, clarinet and saxophone. He’s worked hard to develop his own unique sound and style, and he hopes that his music will become inspirational for other people in similar ways that music was inspirational to him.

“I just want to bring joy,” he said. “So many people are angry these days, and if they can hear my music and laugh and get out of that mood then that’s what I want. There needs to be more love in the world than hate, and too many people are showing hate these days. I want my music to help people feel a sense of joy and feel that it’s OK.”

To listen to SpaceBallz’s music or to follow him on social media, please visit: