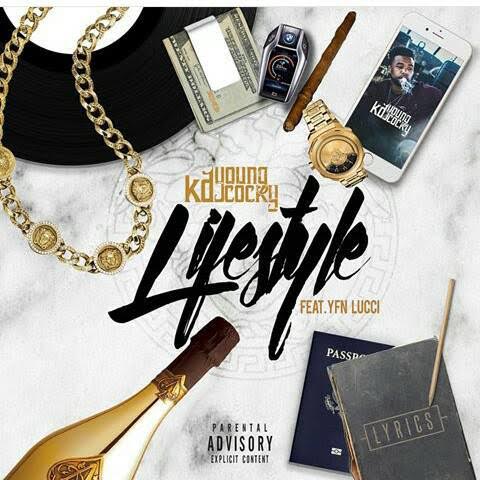 Chicago native Young Cocky takes his talent for writing to the bank. He has a single out right now called “Lifestyle” w/ YFN LUCCI produced by Lawbeatz which has been the main focus of late. The artist said his mood was quite relaxed when crafting the piece saying, “I was enjoying where I was at the time and place in my life when I wrote it” and this vibe translates into the accompanying video which includes a storyline exposing the reality of success with a sexy slant. The premise for the song begs the question, does the infatuation with the subject have real roots, or is it just about enjoying the perks associated with being close to fame. He says many times his writing is directed to the ladies, but mostly he is recognized as a so called street motivator given the circumstance of his upbringing and habit of keeping it real.

Having grown up in a notoriously tough turf supplied plenty of ammo for Young Cocky’s lyrics despite not recognizing the situation for what it was as a youth. In an interview he reminisced, “I’m from Englewood, I can say, I never really noticed how it was growing up until right now when I’m looking back on everything and seeing how it is right now. I just made the best of it, everything was a struggle.” Facing the adversities related to living in the hood including lack of food, the absence of a father figure, and crime related matters have had a lasting impact on him. He has lost several friends and he did a little time, but nothing major. In that same vain, his sound captures the very compelling cynical side of things. This approach is used time and time again for impact, and we’ll soon be able to decide for ourselves if the strategy lived up to the challenge in his upcoming work “Streets Don’t Love Nobody” that he plans on releasing next.

The artist started rapping by the age of thirteen and when Young Cocky recorded his first song he was certainly green, admitting, “Man when I recorded my very first song, I don’t even think I knew what I was getting myself into. But it was fun, that’s like the perfect word.” Naturally he says the process is still exciting but it’s a more refined work ethic, more professional in nature so to speak. There is a certain pride in his voice when recalls those moments early on working with his crew, then dubbed Killer Mafia that first recorded a tape cassette using a karaoke machine Young Cocky’s grandma got him a some sort of church sale. He picked up his stage name after encountering a crowd quite literally responding to his part in a group called Center of the Hood, with “he’s cocky” as he was coming out of a recording booth. Soon thereafter he and his cousin formed a sort of family gang around the nickname, but for as long as he can remember music has been a part of his life, citing Michael Jackson as a childhood favorite and also influence from Uncles that made sure hip hop was always around.

The song “Set if Off” showcases Young Cocky’s freestyle ability, and it’s evident that his background in ghostwriting has nurtured the wordsmith within by providing a vocabulary expansive enough to inspire off the cuff rapping. These days the growing pain pressures have faded and Young Cocky handles himself with steadiness and know how. He describes his live shows as electrifying, “there’s a lot of energy in my performances, I like paint the picture, you’ll love it and come back for more.” He’s played for audiences in New York, Atlanta, and California, hit a bunch of stages at SXSW, and regularly takes part in multi artist concerts in Chicago including a gig with Gucci Man. Young Cocky also has close relationships with several known producers that clearly get him and his sound. He met Hassan Shareef of Madhouse records through a close friend, and after hitting it off they began working together. In describing the experience he says, “It was dope, I’ve done a couple records with him and they came out real good. Then talking to him, he gave me a lot of good advice, good knowledge, and good direction with things that I should know as far as with the industry.” He said he really likes Hassan’s personal approach to matching clients to appropriate business endeavours.

Likewise he has forged a tight connection with two emerging in-house producers Sauce Millions and D. Brooks Exclusive who worked on his songs “Pray for my Enemies” and “Rocky Robin” respectively. When it comes to making it in the cut through entertainment biz, Young Cocky said he tries to avoid foolishness in the sense of separating out what is or is not in alignment with the goals set forth and also serves to friends and family. Like many he is disgusted with the purposefully backhanded manipulation and people taking advantage, having commented, “But you know that like comes with it, I just want to make something genuine.” When prompted to combine favorites into one mega star he gives nods to Michael Jackson, Killz, Jay Z, and largely Sycamore who he credits with showing him the light by way of reading material when he gave Young Cocky the book Steal like an Artist. He uses this as the basis for much of what he creates, borrowing different components of melodies and rhythms then mixing them up and layering them for added dimension.