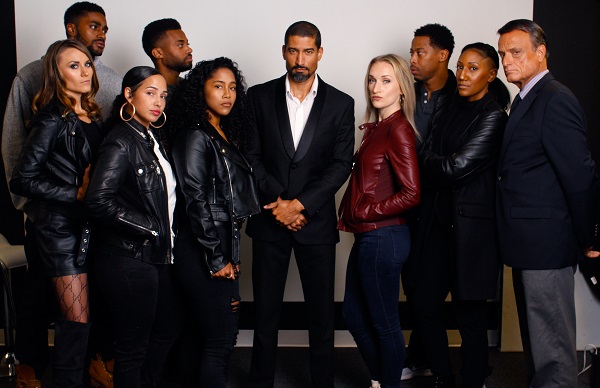 The Clock is ticking, Don’t get caught playing Checkers while everyone else is playing Chess~ Scheming
Scheming is a gritty, new drama 13 episode series, set in the melting pot of Atlanta. Derek a charismatic young man with a heartfelt past, brings together a team of misfits with different skills to perform tasks being assigned to them by a mysterious Russian man who has an ultimate goal for them all. While they take on these different
task Derek wants to mix a little business with pleasure with one of the girls on the team and falls a little harder than expected. Unfortunately her past makes her a very tough cookie to crack. As they progress through each task, they start to wonder is there something more to Sergei’s game. Things get a little messy as Detectives Milton &
Bailey get too close for comfort. Loyalties are questioned, trust is broken and the team has to figure out where their priorities lie and test their resilience to get to the ultimate bag.

“Every team doesn’t come complete with cast and crew that can mesh well with one another. That is why I forsee
Scheming being a huge hit and raising the bar for the status quo.” CelebrityXO~ Celebrity Blogger

EXCUSE ME
Meet Derek, Patrick, Tracy and Sergei. Sergei sees an opportunity and jumps at the chance to put
his deceitful plans in motion. He brings Derek into his game. Derek is up for the challenge and
puts his own team together.

BASEBALL CARD
You gotta be slicker than that Kaitlyn. Kaitlyn is caught on tape. Derek decides to test her skills
to see what she is really working with. Patrick & Derek pulls the band of misfits together and
they past Sergei’s first test.

THE PREDATOR
The assignment is to get intricate information on a slime ball, the problem is, the information is
in his office on a computer. Patrick and Derek know they could use one more person, Derek has
had his eyes on a cute bi-racial little kleptomanic named Tracey .Tracey could use the extra cash
so that she can cut ties with her cheating father.

UNCLE REGGIE
Derek’s Uncle Reggie is home from prison, and trying to convince Derek to help him make some
money in the dope game.Sargent Bryant and Detective Milton is trying to solve a robbery and
applying serious pressure to the guys at.

PRESSURE
Captain Carson is applying pressure to everyone in the precinct .Sargent Bryant can’t handle
the heat, Cases aren’t closing and they need to get some hard evidence and make something
stick, fast.

Scheming was created and written by: Mark Buddington

Mark Buddington is a highly sought after director and cinematographer, He brings 20 plus years experience in
every aspect of directing,producing and writing ranging from music videos, Reality TV and feature films. Mark
is able to captivate and bring any vision to life, delivered in a artistic and visually appealing way. His most
recent works include but not limited to Knockout, VHI (2017-present), Victoria, Amazon (2018) , Hood Pranks
(2019), Champion of Stars , Impact (Jan 2020)

Vi City Releases A Hot New Single "OnGOD" Featuring Harv One of Chicago’s very own, Vi City, originally from the

[Single] @TattedHollyWood ‘On The Road’

Tattedhollywood begun writing rhymes as a teenager, raised in Newark, New Jersey he started to find a creative way