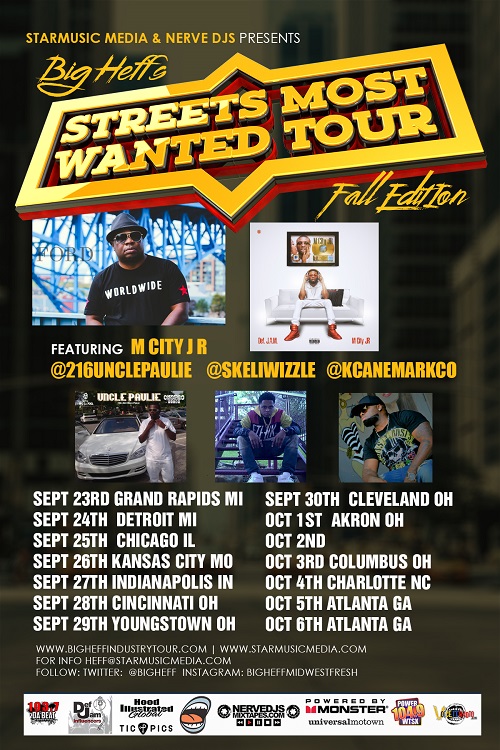 Big Heff returns with his 3rd Quarter Streets Most Wanted Tour gearing at introducing new music and artist into markets for this back to school season.

This all star line up features Atlantic Records recording artist M City J R whose debut single “Addicted To My Ex” hit 36 Million Plays on Spotify in 2016, he returns with his new single “Question Mark” feat Kap G. More hard hitters include Big Sean Protege’ and RocNation artist Neisha Neshae who just completed the “I Decided ” Tour with Big Sean and Made In Tokyo. Neisha is releasing her new single for the ladies called “Ima Go Crazy” produced by Helleva from the Tee Grizzley “First Day Out”. Cleveland veteran Uncle Paulie returns with a project “Paulie vs Pluto” hosted by Bigga Rankin and a single moving up the charts entitled “BankRoll” The tour starts in Grand Rapids, Michigan and 14 cities later ends in Atlanta during A3C weekend. Guest Stops by TK Kravitz of 300 Ent (Formerly of TK & Cash) will be letting everyone know about his new single “Space”. Pittsburgh Native SkeliWizzle joins the tour breaking out of the 412.

Quincy Taylor started working within the music industry in promotions in 2001 with Landspeed Records based out of Boston MA. In 2003 Quincy became the promotions manager for “Big Proof of the Multiplatinum Group D12 “ and Shady Records.

In 2010 Quincy Taylor created the Big Heff Industry Tour, it’s a quarterly artist awareness tour that helps break new singles and artist. This allowed him to develop new markets for his clients with extensive retail promotion, tastemaker events, radio interviews, and concert performances that has allowed Quincy to have nonstop continuous growth for all of this businesses and clients. In 2011 Quincy was appointed as the Vice President of “Nerve DJs”, a midwest based DJ group specializing in radio, club, online promotions, and building relationships between artists, music, and DJs.

In 2014 Quincy “Big Heff ” Taylor joined the team with Def Jam Records as the Ohio Valley Region Rep. working on projects in the Midwest Region. In 2015 he created the Big Heff Radio Show which is now syndicated on 9 different stations and he created a partnership for the Midwest Connext TV Show a video countdown music program which highlights Midwest music. 2017 Big Heff won music exec of the year in St Louis, Promoter of the Year at ECMD, and formed a partnership with Toyz Electronics for the new Toyz Smart Watch.