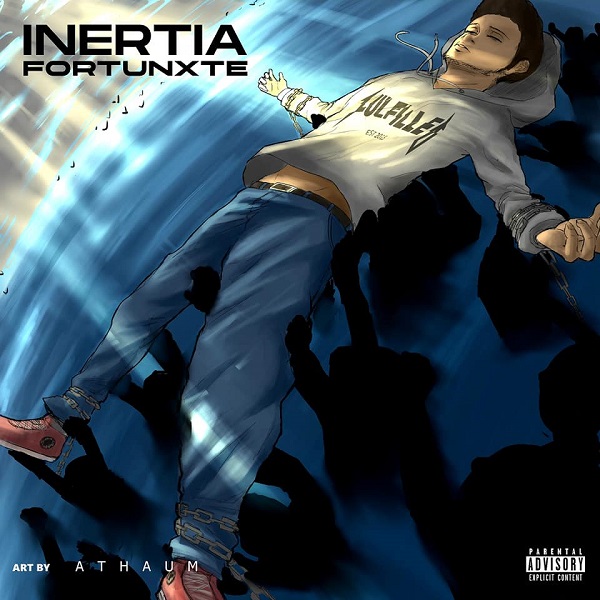 FLINT, MI – Newton’s First Law of Motion states that for every action, there is an equal and opposite reaction. In terms of life-change, it often takes a powerful force to move someone from a place of complacency to an intentional active pursuit of fulfilling one’s dreams. That stillness before the action is called inertia and it’s that process that Michigan artist Fortunxte explores with his new 12-song album of the same name – “Inertia”.  Eight songs on the album were produced by my brother who goes by the name Trey Timez. One of those songs is “Black Don’t Crack”.

“I’m basically saying we are that force of gravity that controls whether we reach our goals or not,” Fortunxte said of his album which is currently available across all streaming platforms. “I’m trying to capture the power of thought with a vibe that is like something you can ride to. There are a lot of melodies in there because I love to work with melodies, and there’s a lot of lyrical rap with a message. That’s what I want my music to be known for – dope music with a message. I’m trying to say something to people and I want my music to inspire and have an impact on their lives.”

Based out of Flint, Michigan, Fortunxte uses his love and gift for writing music as a form of therapy – telling stories about his life struggles and internal struggles with self-doubt. Through music, he attempts to convey messages that spark inspiration with others. As the son of a musician and manager for other artists, young Fortunxte grew up in the studio. Though he said he never had a desire to be a professional musician when he was young, the process of writing and singing and creating a song has always been something that he’s loved. While in college, he was drawn to the professionalism of some friends who were creating music and recording new songs, and it was through that process that he realized he has a passion for it that he knows won’t be satisfied until he’s put all his effort into seeing his dreams realized.

“I’ve been doing it seriously ever since then,” he said. “It’s innate in me and over the years, I’ve developed a style that I think shows how I approach making music differently than anyone else out there. I’m not going to write a song if it doesn’t mean anything. I want to make music to strike a chord in you – to make you feel something. If my words or melodies or songs aren’t going to do that, then I don’t want to do it.”

Perhaps the best example of this from the new album is the single “Stripes” which has already garnered the young artist thousands of plays across streaming platforms. The upbeat, fun record explores the trials and tribulations of Fortunxte’s life in a way that reminds listeners that it’s OK to have fun after you’ve worked hard.

“Sometimes you need to have that stress release and just go out there and have fun,” he said.

Another single that’s resonating with fans is “Black Don’t Crack” which will soon be getting an animated video perhaps by the end of May, Fortunxte said. It’s a song that he says he wrote in response to the number of African Americans being shot and killed.

“I was angry and frustrated and disappointed in America,” he said. “I wanted to tell my people that no matter what happens – no matter how many get killed or degraded or put down – we won’t fold. We’ll keep on striving and keep on going no matter what.”

That song and others are making a splash for this young up-and-coming artist, and increasing numbers of fans across the U.S. are clamoring to get a taste of his unique sound and style.

To listen to Fortunxte’s music or to follow him on social media, please visit: